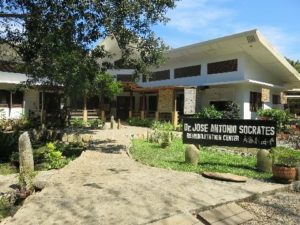 We were very interested to hear from an EMS Physio customer Mr Louis Deliss, Chairman of the British Palawan Trust,  who recently returned from Palawan in the Phillipines. The British Palwan trust has a clinic and workshop there.

An Australian Prosthetist and Orthotist,  Udo Forste, funded by the Australian Volunteers for International Development was seconded to the Trust.  Udo’s job description was to modernise the methods and equipment in the workshop. The Trust has been making prostheses and other aids for persons with disabilities for twenty years but were still using the techniques that they started with. Their worries were quickly dispelled by Udo’s enthusiasm and work ethic. He soon identified the Trusts needs. He introduced new, modern techniques to the prosthetist. He reorganized the layout of the workshop and requested new equipment. The Trust now has three people who have made legs from start to finish independently. The Trust are very grateful to Udo and the Australian Government.

Another optimistic development was the change of emphasis and working methods of the Clinic. Previously there was only one attending Orthopaedic Surgeon on one afternoon a week. Now there are more clinics and the emphasis has switched to focus on persons with disability and working with the Municipality Medical Social Workers rather than the Rural Health Units allows the Trust to help many more patients. They continue to help many people with fractures and other orthopaedic conditions some of which can be treated and others which need finance and appropriate referral. Unfortunately the cost of healthcare is too high for the majority and the standard of specialist ability (all specialties) is generally low with resulting poor patient confidence making some opt for no treatment or to attend ‘faith healers’. The generally low standards coupled with the total lack of any commitment to post-graduate education is very concerning for the future.

Louis Deliss has offered to help develop some form of CME but can’t even get the three or four orthopaedic surgeons to meet.They perceive that they are in competition and are jealous of their income.

Louis was not idle whilst there. He saw many patients and treated some. Two patients with undisplaced tibial fractures were initially told there were no doctors in A&E as it was a ‘holiday’ then that they would need to find over 100,000 pesos (£1700) as a down payment for the “essential” surgery. He put the both in POP casts with weight bearing. The youngest aged 7 was clinically healed before Louis left.

Louis also went on “out-reach” clinics to two remote towns. There he saw between 40 & 90 patients a day. The spread of diagnoses was truly incredible. One story that has moved Louis among the many stories that he has to tell is of a 30 year old man who had dislocated his knee twenty years before leaving him with an under developed leg and a 90 fixed flexion at the knee. Louis gave him a pair of crutches. Many were easier, lots of children with cerebral palsy needing wheelchairs. Older patients after strokes needing physio, walking aids or wheelchairs. A not insignificant number of amputees who were waiting for legs or who did not know how or where to get one. The national sweepstake funds support the cost of limbs for indigent patients. There were many other patients some of whom can be seen on the British Palawan Trust Facebook page visit https://www.facebook.com/palawantrustuk 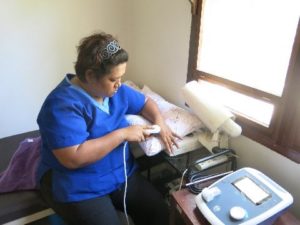 There is still a good flow of funds from loyal supporters. This is supplemented by grants from other European charities and from donations from the USA. Locally they get an increasing amount into the donation box in the clinic, from local donors and Philippine government sources.

EMS Physio was pleased to play a part in supporting the Trust with our equipment and it is very pleasing seeing it put to use in this location.

To learn more about The British Palawan trust visit their website https://www.britishpalawantrust.org.uk/